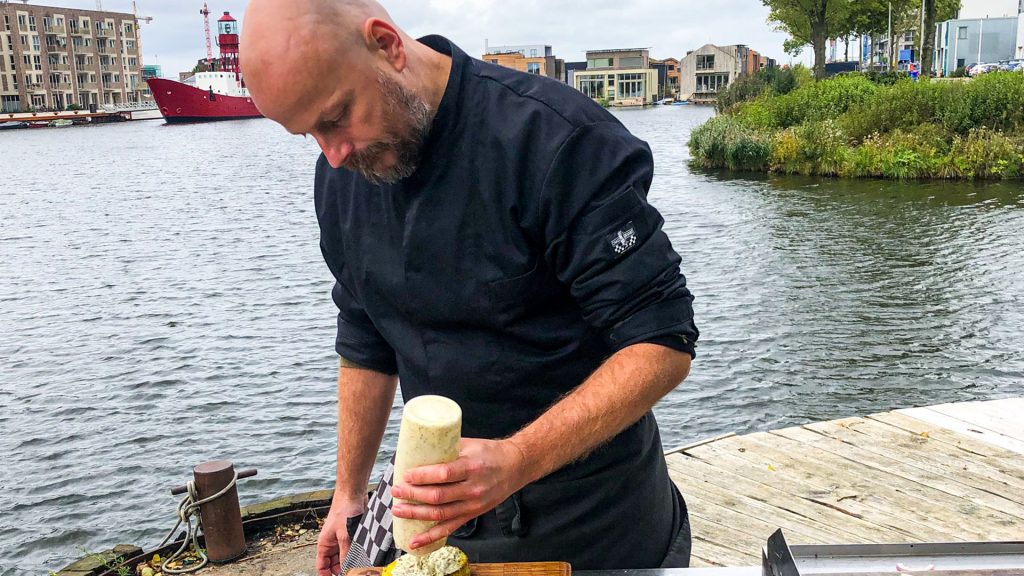 This is how the dismay of the meat lobby after the stop on the ‘veggieburger-ban” by the E.U. is put down to words by one of their spokespersons, Annie Schreijer-Pierik, from the Christian Democratic Party(CDA): the same lady who made the infamous statement: ‘’a jackrabbit belongs in the pan’’.

They have to switch to new ways of cooking, a new approach to dining. A tough call for many since it is so intertwined with culture and identity issues.

This calls for a reaction. First of all, it’s definitely a defeat for the meat industry, that’s for sure. I see the indictment against the hugely successful vegetarian wave by the meat industry as a convulsion of an industry in the twilight of its existence. It wouldn’t be the first industry that goes down in history. Coachmen, carrier pigeon keepers, miners and many more had to give up their businesses due to new and improved ways of executing their work. Now that the plant-based industry is moving in, the outdated meat and dairy industry is clinging to their last straws. There is a difference, I must admit. It’s not only the people that earn their keep that have to change, but it’s also the people that eat their products. They have to switch to new ways of cooking, a new approach to dining. A tuff calls for many since it is so intertwined with culture and identity issues.

Personally, I walk the streets with a smile on my face very often, after I browsed the morning newspaper and stumbled on yet another full page add, promoting vegan food. I come from the old school, when you had 30 minutes in front of your local McDonald’s before you were sent away by the called up police and a frustrated location manager. I remember walking away, despondently following a trail of our self-printed and handed out flyers, full of indictments against the multinational, thrown away on the ground and trampled on by the consumerist hordes of homo sapiens, loyally making their rounds through the commercial city centre streets.

Every attempt by the meat lobby is seized by savvy plant-based marketers to turn things around.

It was to be expected that the meat industry tries to halt the rise of the plant-based lifestyle. It’s kinda sad to see how unable they are to comprehend what’s coming at them when attempt after attempt backfires and blows up in their face. Every time the meat lobby is seized by savvy plant-based marketers that turn things around. ‘’The Yog, without the Hurt’’, by Abbot and Kinney’s is a good example of this, but also ‘’Nobody buys veggie products by misteak’’ from the Vegetarian Butcher. Vegetarian companies are ready to carry out a counter-offensive each time, this time not with self-written flyers, but with full-on billboard advertisements. Animal Rights protest has become a corporate marketing tool for their vegan products.

The times they are a-changing!!

Then, of course, the wonderful: “Fair food information”. Oh, Annie, where do I even start? I become a bit melancholic because I realise you probably believe what you say! I can see her stare out of the windows as pastures full of cows pass by in the distance while her driver steers the vehicle towards Brussels, where she thinks she is fighting for the farmer’s cause. Poorly conditioned by her shortsighted party values, she is doing more harm to the ranks she is representing than ever before in history.

It’s a fucking joke really, coming from a spokesperson from the meat industry.

“I want honest information on where food comes from” is something I have been proclaiming for over two decades now. It’s a fucking joke really, coming from a spokesperson from the meat industry. I have seen the inside of animal hell, I have opened the cages, smelled the stench from ammoniac infested slaughterhouses, stared at the shit-piles under the cages and witnessed first-hand the fear, disbelieve and suffering mirroring back to me from the captive animal’s eyes.

I want fair food information. In this, we agree. So I am happy you open the debate.

Hold on to this Annie, because defeats for the meat industry will keep coming. And be glad that the plant-based sector has the guts and intelligence to look further than the horizon because if we wouldn’t be pushing for change, a defeat for all of us will become a reality. A total defeat when the ecosystems collapse and bio-diversity tips over the threshold of its the ability to support our human culture. That defeat will bear down on all of us and it’s on you and you backwards, ignorant and arrogant politricks. So open your eyes and redefine fair food information in the light of the current climate crisis, before you can only look back on your career and realise, that all that time, you were on the wrong side of history.

It’s seaweed, bro. You won’t get high on our cookies. So is it okay with you if we use them on this website?