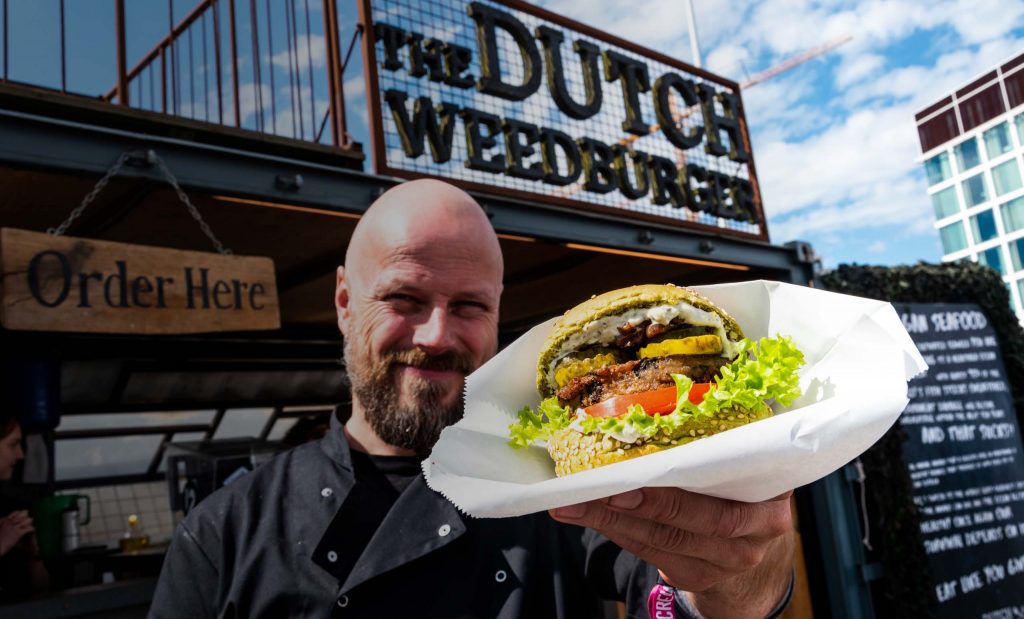 “Hope to see you on the frontlines where real love, peace and happiness may manifest while eating lot’s of tasty, healthy and succulent vegan food!”

What a year it has been. The Dutch Weed Burger has experienced rock-bottom, sky-high and everything in between. Don’t have to tell anyone how strange the times have become with a disruptive virus mutating amongst us. Did I demonstrate against all the measures the government took? No. Was that on purpose? Yes. Not that I don’t believe our government really knows what they are doing nor that I agree with their policies. As the matter of fact, I didn’t believe they were leading us in the right direction, before the virus either, let alone now. I just simply didn’t want to take to the streets, knowing that in the same crowd, a guy would be waving an FVD flag.

Do I want to speak out as a company and choose sides? No. I stopped believing insides a long time ago. There are no sides. We are all in this together. Some of us know some don’t. I know many goodhearted people that reject vaccinations. I know many goodhearted people that took it nonetheless. Do I feel the need to judge either one of them? No. After over twenty years in the vegan and anti-capitalist movement, I choose my battles wisely. And actually prefer not to use army or war rhetoric at all, Although it does strike the point perfectly. There is a war going on against the planet, against the animals, against biodiversity against a prosperous future for ourselves and generations to come. It strikes me sometimes that we are not doomed, but we are really good at bringing doom over ourselves. It hurts to realise that because I know that real change is possible when every conscious being puts in their heart and soul and do the work that needs to be done. Live a life in which he and she and all in between, has the discipline to refrain from products and services that bring our culture to the brink of extinction.

That’s why I believe in the plant-based movement and all those kind-hearted rebels that go at it every day. People from Wakker Dier, Milieudefensie, Animal Rights, Jaan, Stichting Aap, Extinction Rebellion, Proveg and all the other beautiful organisations. That’s why I believe in brands like Mr&Mrs Watson, Boon, Meet Jack, Karma Kebab and of course all my new brother brands at The LiveKindly Collective. That’s why I love to work with my new colleagues at the LKC, for the time has come that the crème de la crème of business as a force for good has placed its focus on growing vegan food and making plant-based the norm. Much respect to Kees Kruythoff and Roger Lienhardt to build the endeavour of all endeavours and collecting all the ambitious talent and experienced business leaders around the most important cultural change that our world has gone through ever, the switch from Animal-based to plant-based food culture.

I wish everyone who is still reading this a well-deserved rest and quality time alone and with family, preferably in nature and looking forward to 2022 to keep grinding at it and push things forward. Many thanks to all the partners that have made this Weed Burger adventure reality, you know who you are! To end this Christmas message I want to share with you our vision for the future, our Weed Burger brand manifesto. Hope to see you on the frontlines where real love, peace and happiness may manifest while eating lots of tasty, healthy and succulent vegan food!

We are the rebels that believe in radical change. Not the usual suspects, but the kind ones that make it truly happen.
We refuse to look away from the harsh reality of our broken food system and bravely stand up to face our destiny, even though it’s frightening-as-fuck.
Our intention is to live in compassionate co-existence with the natural world and all of its inhabitants. Therefore, we aim to give back to the community’s much as we receive what we need to thrive.
We are the ones that turn the tide for the animals, the planet and ourselves, guided by the gospel of the sea, the source of all life. Powerful and Peaceful.
We are nourished by the best foods that the plant-based kingdom has to offer. From protein-rich beans to the magical wonder of the ocean greens.
Always enjoying this profound deliciousness.  Dive in with us and ride along on this wave of radical kindness. Eat Weed Live Long.

Plant-based living is the only chance and if cutting back is already an improvement, why not just stop! We owe it to our children, but foremost to live itself! Respect Animals and the environment and Go Eat Vegan!